During today's ride, I recalled the veterans from my immediate and extended family.  We have been lucky in that there has been only 1 war death - that I know about - in the extended family since and including the Second World War.

My dad's younger brother, that would be my Uncle Lawrence, only 7 1/2 years older than me, left part of his pelvis in Nam, and has had occassional flair-ups from an exposed nerve -- I thought of him.  My paternal grandfather's half brother served in Europe in WW II with the signal corps; family legend is that he had a thrilling story about being behind German lines, racing in a truck to stay ahead of pursuing Germans, one guy driving as fast as he could, leaning out the door window to look around the raised hood - which was raised because the other guy was lying on the "fender" trying to fix something with the engine; the family legend includes that when he told that story in the late 40's / early 50's, that my great-grandmother grew faint, because she had always thought that her son was safe, well behind our lines, doing signal corps things, not behind German lines stringing telephone lines before major attacks.

I thought of my brother-in-law, who spent most of his time in the Air Force painting the inside of missile silos.  I thought of my two brothers who served in the Army; I think Earl never left the states; my baby brother, Adam, served in Germany and had a short stint in Kosovo, and was in Atlanta for the Olympics there.

I know my maternal grandparents had several siblings, on both sides of the family, that served during WW II, but I know almost nothing of what they did or where they were stationed.

I thought of Lynn's Uncle Mack, whom she never met, because he died during the assault on some Pacific island.  Mack never made it ashore; but the unit medic, who won the Silver Star (I think) that day, credited Mack (in his unpublished memoir) with shooting down two planes from their landing craft before a third one got him. 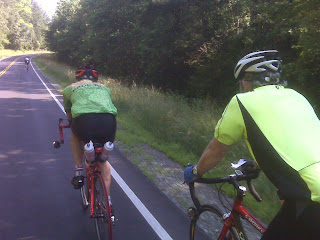