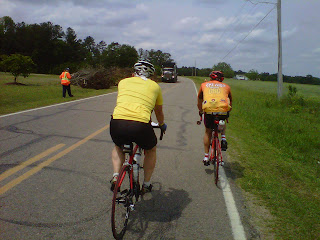 Yesterday was the Raven Rock Ramble Centurypointohfour. In attendance were Tito, LtDave, The Red Rocket (aka LeeD), IvaHawk, and maybe Dr. Phil.

LtD, RR, Iva started and finished together with some waiting on Iva from the other two. We never saw Tito. Later I learned he parked outside the gate, rode up to the front of the starting line, and took off at the gun exiting the park proper in first place! He hooked up with some other rapid types, worked hard, and had a fast ride. He ended up averaging over 19 mph with on bike time of 5:15. Nicely done.

The other three of us departed together. Around the 10 mile mark, LeeD broke away from a highly bunched peleton. Then LtD saw his opening and followed leaving Iva in the pack. I did see and talked to an old IBM colleague of mine who was doing the 100K. Finally, I was able to break out and hopped on a wheel piloted by a God-Unfulfilled jersey going at plus 20. He turned left on the 100K route at the first sag. The 100m went straight. I could see the other two about ¼ mile ahead riding with someone in white. Another angel came by wearing a Thorns and Roses jersey (it was Sunday). I hopped on his wheel and told him those were my guys ahead, and he took it upon himself to catch them which we did just before the base of a long steep hill. So off the back I go without them knowing I was ever there.

We hooked up at sag stop 2 and basically rode together the rest of the way with them waiting for me following long or steep climbs.

The final leg on Old US 1 was not slow with six of us in a good pace line. I had a good pull (my only one of the day) for awhile. Then a young man in the group took over with us hanging on to the finish line.

Here are some ride comparison times:
Tour de Romandie yesterday's stage: Ben Swift and Oscar Freire and others 102 miles in 3:51. Does not compute for me.
Raven Rock Ramble: Tito Craige and others 5:15
LtD, The Red Rocket, Iva 6:15 LtD and RR faster with wait time factored out.

One sobering note was the tornado damage we saw along the way. LeeD expressed it well in a note to Martin. I hope he doesn't mind my using it here:

There was a sad time though. Somewhere around Broadway-Sanford we came upon a ugly scene. I was pulling and we came to a road closed sign. Ahead were FEMA trucks (big mothers). I decided to take us through and we had to stop for a few minutes. Here is what we came across: houses, then a house with some tornado damage, then a brick house with two walls standing, then a 1/2 mile of no houses with huge piles of debris at the road that the FEMA trucks were picking up (the remnants of the houses that were completely demolished, flattened totally), then standing houses. To see where the tornado went through and completely leveled houses was saddening to me. To think that some of the insulation from the houses could be what I have been finding in my yard.