The route starts and finishes at Cameron Village in Raleigh (route map).
Goes east/northeast out of downtown to Bunn and then east to Spring Hope,
Where the route reverses to return to Raleigh via Bunn.
140 kms.

One of these times when I do this ride, or one of the others mentioned below,
I need to remember to take a photo or two of the temple complex just south of Wake Xroads.
When this route was created, the "complex" consisted of the original house and a statue or two.
Now, well, only a photo would suffice to explain, and I don't have one.
Yet.


My reasons for riding were:


(1) to help get into shape, or
(2) to meet route-owner requirements to maintain familiarity and assure appropriateness, or
(3) both.


I'm not sure.
Maybe to get back into shape for riding non-flat routes?

There was more traffic between Bunn and Lake Royale outbound than I expected / more than I recall previously experiencing. Forestville Rd inbound had more traffic than I would have liked / perhaps more than Buffaloe Rd, which is usually the road with the annoying traffic.
Route appropriateness conclusion:  Hope Springs Eternal is a useful route on weekends (also Bunn Warmer, Yellow Dog Lope to Spring Hope, Yellow Dog Run to Bunn - they are all the same route, they just start in different locations and/or turn around in different locations).
Some photos taken en route follow.
All were snapped by Brad -- I took one or two, but Brad's are better.

Well, there are several decent and informative photos, but every one of them insists on loading sideways and I cannot get them to stand upright (even though I did the necessary edits to the photos).  I blame iPhone (or whatever so-called "smart phone" that Brad uses; I don't blame Brad.

Brad started out like a house a'fire.
Storming up every incline (while I just spun my way up).
I did find that I was putting more effort into the inclines, small though they are, than I wanted.
So, finally, on one incline, I sped up to tell Brad that he was going to wear me out,
Zooming up the inclines as he was doing.

At 29.2-miles into the route, one passes Perry's Pond, and 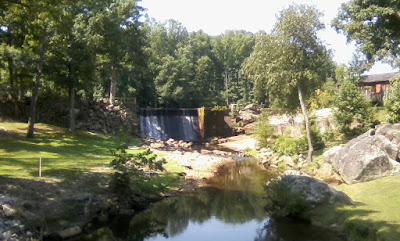 Then one immediately rides up what may be the biggest climb of the day.
I took my time going up, whereas Brad predictably sped ahead.
However, luckily for Brad, the incline eases nearing the top, and
I was able to close the distance between us.
I got close enough that I was able YELL to Brad that he had missed the turn.

Interestingly enough, that was the last climb where Brad was quicker than me.
You might be thinking that he was concerned about missing future turns.
But that would be wrong thinking.
He had worn himself out with all the premature climbing attacks.

The unfortunate thing about that for Brad was that later in the ride,
I realized that I needed to slow my pace to keep the two of us together.
I recalled a comment once made by TimL #6016:


"Martin slows down when he talks."

As a result, Brad was on the receiving end of a monologue
Of my high school athletic endeavors.


We finished, taking longer than I had anticipated, but we did not set a course record.
Posted by skiffrun at 9:17 PM No comments:

On the verge of completing our NC-P-12-Explorer-Challenges,
We let Bob choose among two or three logical options.
He chose "Taylor's Gin" because it seemed the easiest for him to drive to,
Even though not the closest.

This ride/route would complete Bob's Explorer Challenge.
And be the 11th month for Iva and me.

Below is a copy of route-owner Tim's RWGPS map:

Bob and I were each somewhat familiar with the route,
Because "Taylor's Gin" is essentially a shortened version of the Lake Gaston Perm.
I've done LKG once; Bob probably twice;
And some of the roads have made multiple appearances on Taste of Carolina or
Carolina Spring 1200 grand randonnees -- events for which each Bob and I have volunteered.

In fact, on the homeward bound leg, I stopped to take the pic below,
Simply because it was in front of that abandoned house where
I tried to put a cheap rain cape over RickB's (#2806) head the previous October,
During the second day of the Taste of Carolina, 2017 edition.
It was rather amusing in the heavy-ish rain and wind and the plastic trying to choke off Rick's air supply.
Ricky did ask if I was trying to kill him. 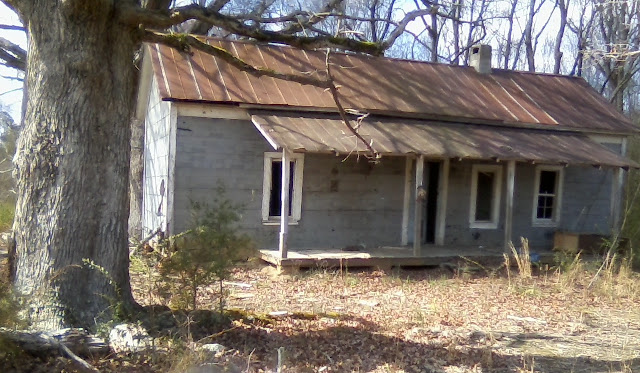 Back to the Taylor's Gin ride:
The weather was a bit chillier than we expected,
And perhaps the outbound leg was into a slight headwind.

Either that, or I forgot to bring some warm-ish hand-gear.
As a result, I purchased some cotton brown jersey work gloves at the "Dollar Store"
Across from the turn-around control,
To use as long-finger "liners" under my short-finger cycling gloves.

Everyone was somewhat warmly dressed.
Remember, this was north-central North Carolina in early March;
Not Maine, not Massachussetts, not Michigan, not Minnesota, not Montana.
I don't know why I listed states starting with "M",
I probably should have used states starting with "N", so:
Not North Dakota, not Nebraska, not New Jersey, not New York, not New Hampshire.
Not any northern USA location, nor anywhere in Canada for that matter.
So the definitions of "chilly" and "warm clothing" should be adjusted accordingly.

An unposed pic from the finish will suffice to finish this blog post: