IvaHawk arrived second, about 5:53.
I looked at Iva and at my watch.
Iva commented "I know, I'm early."

Robert and Aggie and BobH arrived in the next couple minutes.
I don't recall the order, but I think Bob may have been last of the three.
Bob was surprised that so many people were there before him.

Snapper arrived around 6:00 or 6:05.
Early for him (relative to wheels-away time).
He asked if my e-mail worked because he sent me an e-mail to find out when it was to be "wheels away."
Turned out he sent it at 9:43 p.m. Friday.
I was no longer connected to the digital world by then.

I'm sure the look on my face was at best flabberghasted, at worst, not sympathetic.
What could I do?
Spare water bottle, spare pair of gloves, spare pair of socks, spare jersey.  I usually have.
Spare bike.  Sorry.  I can't help you there.

IvaHawk suggested his Raleigh, his "back-up" bike.
Iva only lives 3+ miles from PUE.
Tito's cleats and the pedals on the Raleigh were not compatible.
Iva mentioned that he had a set of "cages" they could put on the Raleigh.
At least he wouldn't be duct taped to the bike.

The prize, before today, was Iva forgetting his front wheel.
But the new booby prize goes to Tito:  Dude, where's your bike?

The ride was HOT and humid, and I think we all had a pretty good time.
Per Iva's request, we rode our version of "a Mt. Tirzah Tour".
Good climb on Stagville Rd to get up to Bahama.
The Flat Wall from the Flat River up to the plain around Mt. Tirzah was a good test.
But it isn't as tough as the Ruin Wall (wait until next week).
And after having recently ridden through the heart of the Uwharries (me), and Snapper having successfully completed the Assault on Mt. Mitchell, and most of us having made a relatively recent trip to Hanging Rock / Pilot Mtn., the Flat Wall was not that daunting.
Still good climbing.  And good scenery, esp. on Moores Mill Rd and Helena-Moriah Rd. 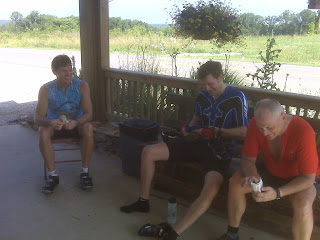 A well-deserved break in Mt. Tirzah.

I could write more, but why?
It would just be dribble about who did what when.
Or who pretty much over-heated and sorta' bonked late in the ride (me).