The original plan for the Solstice was a 300k "irregular" ride, but due to life, the cast of "interested and likely to ride" got down to only two riders.  Being flexible, we changed plans.  And instead did the "Virginia Border Raid", a slightly long 100-miler that starts from PUE, includes a few miles in Virginia, and was / is the original "irregulars" "Pizza in Stovall" ride.  The change of plans turned out to be a popular choice.

Twelve starters.  Not quite equalling the record, but certainly more than two.

I originally found, ripped-off, scouted, planned, designed, cue-sheeted this course in about April or May 2007 for a 2007 Solstice Century for Frank and me (the entire "membership" of the "irregulars" at the time [edit:  that were interested in riding SO far - by mid-2007, Gargan had come and gone, but had left Harvey (not yet a Snapper), BigWaveDave, the Duke, and Barry as 2007 additions to the crew]).  It was to be the first 100-miler for Frank and for me.  However, Frank had a conflict arise the night before the ride, so ... we didn't ride.

I went on to do the ride on Sep-29-2007, solo.  Without a cue sheet, of course [edit:  for those that may be interested, I did almost get confused about the route between Stovall and Antioch Rd.  I've always found that getting lost, or thinking you are lost, turns out to be a REALLY good way to learn and remember how roads interconnect].

At the time, the climb up Brogden Rd to Stem still daunted me, so I made a "smart" decision, and turned onto Tump Wilkins Rd -- which I had never checked out, but which I was confident was a "short-cut" given that I had decided to take Belltown Rd north out of Stem to stay in a "tree tunnel" and out the NW wind that I would have been exposed to on Culbreth Rd from Stem.  My "smart" decision wasn't:  Tump Wilkins was not a short-cut - it probably added about 1/2 a mile to the course; Tump Wilkins was NOT less hill climbing than Brogden Rd, because whereas Brogden is one continuous climb, Tump Wilkins is down-and-up, down-and-up, etc., with at least three separate climbs and each giving away all or most of the elevation gained.

Btw, that was the first and last time I ever rode Tump Wilkins.  I'm not afraid of the road, but there really is no point to riding the road because it bypasses Stem, and someone might want to acquire additional fluids in Stem on the Border Raid or any other ride we do that passes that way.

The cue sheet is almost unchanged from that original ride, although I may have improved some of the original distance estimates for various sections.  The cue sheet also indicates a turn off Cannady Mill Rd onto Philo White Rd, which I no longer do when doing this ride.  (Originally, I was daunted by the long, gradual upslope on Cannady Mill after passing Philo White, and also the long, gradual upslope on NC-96 -- that terrain no longer intimidates me.)  The cue sheet also shows a finish staying on New Light to Six Forks to Pleasant Union Ch Rd.  Three years ago, I was still somewhat daunted by Ghoston and somewhat afraid of Peed Rd -- I no longer have those silly concerns.  Also, since 2007, I had occasion to be riding New Light / Six Forks when very, very tired and worried about falling over in front of the traffic on NL / 6F -- and I found that although Ghoston, Peed, MVC is tougher than NL / 6F, there is a lot less traffic, and I can get up those three hills even if very, very tired.

We pushed off several minutes late (someone was still lubing his chain at approx 6:05 and another did not arrive until 6:07).  However, everyone had all the essentials, and we pushed off into the fog at 6:09.  The only thing I remember about the ride between PUE and Creedmoor is that we were moving quite fast on Old Weaver Trail -- I was glad when we turned onto Whitt Rd and rollers on Whitt and Dove slowed the pace somewhat.  I can never work out why most everyone rides through downtown Creedmoor so slowly -- the road is mostly flat; it is easy to ride 18 or 19 mph; the speed limit is 20 mph; but we always seem to ride thru at about 14 mph; eh?  As we neared the turn onto Lake, it seemed to me that at least a couple people were glancing back as if uncertain of the turn -- maybe they were looking back to check the traffic.  Anyway, we made the turn onto Lake, and then zipped up to make the turn onto Stem Rd which becomes Brogden Rd.

Various people were chatting with various other people.  I recall NOTHING from the turn off NC-56 until crossing over I-85.  Maybe I've done that stretch of road too many times for any destinct memories to remain.  I do recall chating with BigWaveDave, and that my Cateye was messing up (failing to properly record speed consistently).  I knew the problem with the Cateye -- condensation from the fog getting on the contacts -- I've had the "problem" before.  The condensation accumulated enough so that just as we crested the climb at the edge of Stem, my speed went to "0.0", and remained there until quite a few miles later.  The thing that dried out the Cateye was the increased breeze penetrating to the contacts.  Sherlock Holmes confirmed that for me.

The good thing(s) about the Cateye messing up:  I had to ride totally by feel, and I had no idea what the average pace of the ride was.  (Information below the break is based on ... "swag" -- not actually, but that is shorter to type.) 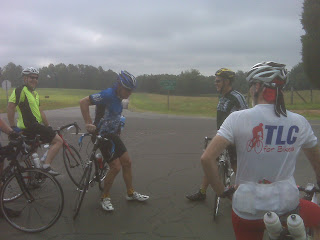 Tried to get a group photo at the border; had to settle for the above.
Left to right:  LT, Tito, Smitty, Gary.
This photo seems to be mostly free advertising for Gary.

The fog lasted at least until we reached the Virginia border, and for several miles beyond.  By the time we reached Stovall about an hour later, though, the fog had dissipated and we were in bake and broil mode for the rest of the ride.  But luckily, it is only 42 flat miles from Stovall back to PUE.

A few weeks ago, we learned that the "Pizza in Stovall" is not ready until 10:30 -- if you want pizza, don't arrive before 10:30.  I think the lead riders got into Stovall about 10:35.  On this ride, we learned that if you want a sub-sandwich, don't arrive until 11:00, because that is when the help that makes the sandwiches gets to work.  A couple of us managed to talk the clerk into making us 6-inch turkey breast subs before 11:00.  Some of the early arrivals were jealous of our non-pizza foodstuffs.

The indoor plumbing at the gas station / store at US-158 and Antioch Rd was non-functional due to a water problem.  There was an outside "construction-like" mobile facility.  Sad?  I dunno' -- I've never had occasion to use the indoor facilities there.  The had plenty of chilled gallons of water -- and that was appreciated.  I only filled one of my large bottles and my small bottle -- I wish I had taken on more water, but that would have required additional purchase.

Some of us need a mile or two or three (or more ?) to get re-warmed up after a Refueling or Lunch Stop.  Lee, on the other hand, needs only one turn of his cranks, and then he is go-go-go.  This was confirmed to me by Tito.  Luckily, Lt. Dave went up and took over the lead from Lee, slowing the pace slightly until more of us were in go-go mode.  (That was after the US-158 / Antioch stop.)

Before the US-158 / Antioch stop, Robert got his first ever experience leading the line -- he immediately started dropping everyone except Smitty.  Gary went up to ride alongside Robert and coach him; by the time Gary made it up to Robert, even Smitty had decided to drop Robert off his front.  I think Robert got a good lesson -- he dropped his pace a bit and the group reassembled on his wheel, anyway.

Although I did not suffer to climb back up from the Tar River bridge, everyone dropped me like an anchor.  Luckily, the lead 8-pack slowed slightly on the slight upslope to NC-96, and I caught back up before the highway.

I don't recall much the rest of the way to Grissom, except that we stopped in Wilton so that some of us could check our water levels, and ... we were in Wilton for a longish time ... I don't recall why.  Lucky there is that huge shade tree.

After Wilton, I managed to get second wheel, behind Lee, across to Horseshoe Rd.  Once on Horseshoe, I have no recollections.  I know I was slow on the steep part of Lawrence Rd, but actually faster than I often am.  I recall none of the mile-long slight upslope to Grissom.  I recall nothing about anyone else ... probably because they all dropped me on the steep part of Lawrence Rd..

Everyone else arrived at Grissom before me (I do recall that).  Those already there included the following: 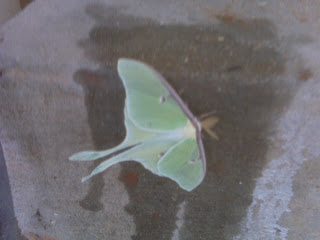 I parked my bike and went into the store looking for something in addition to water that might catch my eye.  I saw the A&W Root Beer.  I decided I was having "second lunch" consisting of that Root Beer -- regardless of what anyone else decided to do.  Everyone else except Gary and Wendy decided to leave immediately for PUE.  I enjoyed my Root Beer, then purchased another gallon of water.  Gary, Wendy and I filled all our water bottles, and drank some nice, cold water, and refilled bottles again -- leaving much less than a quart of water for any "knowing" cyclist that might happen upon the scene in the next half-hour.  Then we rode for PUE -- at a pace between leisurely and hammerly.  [Edit:  I later heard that the lead six eventually split into three hammers and three people trying to enjoy the ride.  I think I'm glad I took the time to enjoy that Root Beer.]

This, the third time, there were twelve of us at the start, but three turned back as planned at Culbreth after approx. 26 miles, so there were nine of us for the whole ride.  Based on a "veloroute" check of the actual course ridden, I rode 106.9 miles, I'm guestimating a moving average of 15.4 mph, and it took 8 hours, 50 minutes of elapsed clock time.

The rides keep getting shorter, but they take longer.

IvaHawk sent a fuzzy / foggy photo of his cycle confuser.  Photo taken after the ride. 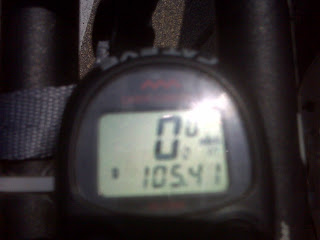 Smitty sent a link to his Garmin data:  Smitty's Garmin data show
I find his heart rate chart particularly interesting.  A steady increase from the start to about 3 1/2 hours into the ride; then about 2 hours of a slight overall decline (gazebo in Stovall and the flat terrain from Stovall to Falls Lake ?); then the slight upward trend continues, almost as if there was no 2 hour "rest period".